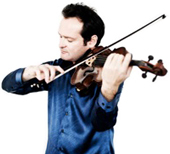 Krzysztof Chorzelski was born in Warsaw in 1971 and enjoys a diverse career as a performing musician that has taken him all over the world as violist of the acclaimed Belcea Quartet, chamber musician and soloist.

In 1991 Krzysztof moved to London to study at the Royal College of Music with Grigori Zhislin and later Felix Andrievsky. In 1992 he won the Wronski Solo Violin Competition in Warsaw and has subsequently performed as a recitalist and concerto soloist in Europe, making recordings for Polish Radio and the BBC. In 1996 became the viola player in the Belcea Quartet with whom he has won major prizes at competitions, such as Osaka, Bordeaux and Banff. The quartet’s international schedule regularly takes him to the world’s most prestigious halls, such as Wigmore Hall in London, where the quartet had a five-year residency, Konzerthaus in Vienna, Concertgebouw in Amsterdam, Theatre de Chatelet in Paris, Berlin Philharmonie, as well as Carnegie Hall and Lincoln Center in New York. The Belcea Quartet's recordings for EMI were highly acclaimed by critics, winning a Gramophone Award, the Midem Award, the Diapason D’Or and the German Critics Chamber Music Recording of the Year Award. During the 2011/12 season the quartet will perform and record the complete Beethoven String Quartets for release on the Zig Zag Territoires label.

Krzysztof is a viola professor at the Guildhall School of Music and Drama London, where the Belcea Quartet are also Quartet in Residence. He also returns regularly to his native Warsaw to teach at the Chopin Academy and the Elsner Music School. Krzysztof also gives regularly viola and chamber music master classes in Switzerland, Poland, Romania, Israel and Colombia.

Krzysztof is a frequent guest at international festivals such as the Spoleto Festival in Italy, Spannungen in Heimbach, Germany, the Oxford International Chamber Music Festival, the Four Seasons Chamber Music Festival in North Carolina, USA and the Moscow Chamber Music Festival “Vozvroshchenya”. He also works as a chamber music partner with Quatuor Ysaye, Ensemble Les Dissonnances, the Razumovsky Ensemble and artists such as Stephen Kovacevich, Piotr Anderszewski, Polina Leschenko, Andrew Zolinsky and Natalie Clein and Katya Apekisheva. In 2006 he was invited by the Alban Berg Quartet to perform as a guest violist in a series of concerts celebrating the 250th Anniversary of Mozart’s birth in the Konzerthaus, Vienna.

Krzysztof studied conducting with Neil Thomson at the Royal College of Music and Diego Masson at Dartington Summer School. He recently founded a chamber orchestra based in London called the Metamorphosen Ensemble. His recording of Ittai Shapira’s Violin Concerto “Concierto Latino” with the London Serenata Orchestra and the composer as soloist has recently been released by Champs Hill Records. His debut solo recital recording with pianist Katya Apekisheva was released in February 2012. It was launched by the two artists with a recital at London’s Wigmore Hall Download Word Document 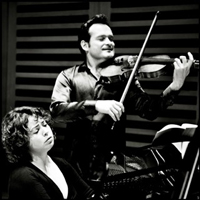 Katya and I have been friends and chamber music partners ever since our studies at the Royal College of Music in London in the mid-90ties. We performed and recorded for the BBC Radio 3 then as a violin and piano duo and it is a great pleasure for me to be able to continue this musical partnership with Katya nowadays - in our current guise: viola and piano!

Conducting has always been of great interest to me. In 2006 I went back to the Royal College of Music to enrol as a student in Neil Thomson's conducting class. This was a very valuable experience for me which led to my first conducting concerts with an orchestra I founded and called the Metamorphosen Ensemble - composed entirely of my wonderful musician friends. The most memorable concert we played was the performance of Strauss's Metamorphosen at London's St. John's Smith Square in 2009. CD recordings with the London Serenata followed this experience as well as a very memorable summer at Dartington in 2010, where I was invited by Diego Masson to join his conducting class. This resulted in taking part in two performances of Mozart's La Nozze di Figaro - definitely the happiest conducting experience for me to date!

I have been the violist of the Belcea Quartet since 1996. This is a wonderful adventure in my life because of the music that we play and the friendship that we share. It has taken us across the world many times over and given us many wonderful memories and exciting plans to look forward to. We are currently in the middle of the most exciting of all our projects: performing and recording all the Beethoven Quartets!More